What are septic systems?

Septic Systems are considered to be on-site systems designed to safely dispose of biological sanitary waste. “Gray Water”, such as laundry waste, is a part of the waste system, but may not result in what is referred to as “biological” waste.

Why do Septic Tanks/Cesspools appear to be full after recent servicing?

It is necessary for the tank to operate full for water/solid separation. Solids remain in the tank or cesspool and water is leached out to the leaching field and/or absorption field.

What are the components of a Private Septic System?

The gases that are generated vent to the atmosphere via the plumbing vent system. From the septic tank, the segregated and relatively clear liquid flows into a small distribution box where is then metered out to several perforated pipes. These perforated pipes then deliver the liquid to a large soil surface area, called a leach field, or absorption field, for absorption.

The soil also acts as a filter to remove any small amounts of solids that may be carried along with the liquid. The sludge in the bottom of the tank must be periodically pumped out and properly disposed of. 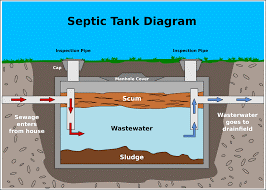 Why do Septic Systems Fail?

If the liquid effluent cannot soak into the soil surrounding the leach field, sewage may back up into the system and overflow into the house or puddle on the surface of the ground. There are several possible causes for this problem.

How long should a Septic System Last?

You can expect a conventional septic system, such as that being described here, to last about 30 years. Some systems last much longer and some systems can fail earlier for reasons like those noted above. Other things can also affect the life of a septic system. For example, a system may have been providing satisfactory service for a previous owner for many years, only to fail shortly after you have bought the house.

If the previous owners were a working couple with children, the system was probably not heavily used; if yours is a family of six, the added load could push a marginal system over the edge and into failure.

What are the Signs of a Failing Septic System?

Sewage backup into the home is one possible sign of a failing system. However, backup can also be simply the result of a blockage somewhere between the house and the septic tank.

Another possible sign of failure is a smell of sewage outside the house. If this smell is more noticeable after a lot of water has been put into the system- multiple showers or several loads of laundry ( if the laundry waste discharges into the septic system), for example- this may be an indication that the leach field is failing. The smell may also be accompanied by a “spongy” feeling in some areas of the leach field, near the distribution box, or near the septic tank.

The “spongy” feeling may be caused by water and waste being pushed to or near ground level. If ponding water is also seen, this is called “breakthrough” and is an almost positive indication of failure of one or more parts of the system. This smell, however, can also originate at the plumbing vent. In either case, further investigation is warranted.

What is the difference between a cesspool and a septic system?

A cesspool is a pit which acts as both a settling chamber for solids and a leaching system for liquids. The use of cesspools may overload the capacity of the soil to remove bacteria, viruses, and phosphorous, and to nitrify ammonia and organic nitrogen compounds. A conventional on-site system has a on-site tank where solids can settle and begin to degrade, a distribution box, and a soil absorption system (SAS) that further treats the effluent by removing some of the bacteria, viruses, phosphorous, and nitrogen.

Does Title 5 require every cesspool to be replaced?

No. Only those cesspools that exhibit signs of hydraulic failure, are located extremely close to private or public supplies, or otherwise fail to protect or pose a threat to public health, safety or the environment will need to be upgraded. Also, cesspools must be upgraded prior to an increase in design flow.

Must my tank be pumped at time of inspection?

The regulations allow for the inspection to be done in the least intrusive manner possible. As part of the inspection process, a cesspool and septic tank must be pumped out and examined.

Who are Title 5 approved inspectors?

How long before a Title 5 approval expires?

The approval is good for 2 years after the inspection for sale of a home or transfer of title (different rules apply for “shared systems” and condominiums). If the system was inspected within three years of the sale and you have records proving that your system was pumped annually since that inspection, the approval should be acceptable.

What happens if I fail a Title 5 inspection?

If a system fails a required inspection, the inspector is required to submit the form to the local board of health within 30 days, and the homeowner must provide a copy to the buyer. The system must be repaired or upgrade within two years following inspection, regardless of whether the property is sold.

How can I keep my septic system running properly?

Septic systems thrive on wastewater, but certain chemicals can cause problems and impair the functioning of the system.

Don’t: Flush or pour even small amounts of paints, solvents, thinners, nail polish remover and other common household compounds down the drain.

Don’t: Pour large amounts of laundry bleaches, toilet bowl cleaners and caustic drain openers into the system. These can slow the treatment process and allow sewage to pass through without proper treatment.

Don’t: Allow oils, grease, or fat to enter the system as they cannot be digested properly. Poured down the sink or toilet, they may congeal in the pipes and potentially plug the septic system. Grease can also combine with detergents and flow into the drainage field where it may clog the soils. Fats can form a mass at the top of the tank and interfere with the biological activities taking place. All oily waste should go out with the garbage or taken to an appropriate municipal facility for treatment.

Don’t: Use your septic system to dispose of garbage. In- sink garbage disposals put a strain on the system. Save the kitchen waste for you composter outside. Disposable diapers, wrappers and many other kinds of refuse can plug and impair septic systems. If something doesn’t break down naturally, don’t flush it into your septic tank.

Don’t: Overload your system with excessive amounts of water. Septic tanks require a sufficient retention time to allow the solids to separate from liquid. Large amounts of water may cause untreated solid material to flow into the drainage field possibly clogging it. Even if the drainage field does not become blocked, there has not been sufficient time for the physical, chemical and biological breakdown of the effluent. Discharge into the ground and groundwater table may contain dangerous bacteria, viruses and pollutants at unacceptable concentrations.

If you still have questions, please call us today… We are always ready to help you out!

How Can We Help?

I’ve noticed an odor…could it be my septic system?

I need interior pipeline cleaning. Do you do that?